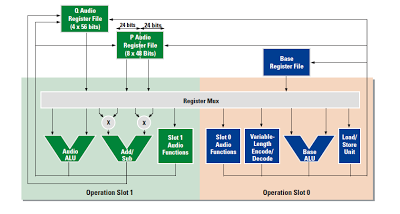 A processor core which can run all the world’s digital broadcasting standards has been produced by the custom processor company Tensilica, and it has been designed into SOCs by five out of the top ten semiconductor companies.
"The problem was how to build one platform to address all geographies," Tensilica’s founder and CTO, Chris Rowen, told the Globalpress Summit Conference in San Francisco yesterday, "Tensilica’s HiFi platform is the only platform which can run all the digital broadcasting standards."
The DRM decoder on Tensilica’s HiFi 2 audio DSP is based on software developed by Dolby, and the implementation has been certified by Dolby. It has support for DAB, DAB+, HD Radio and XM Radio.
DRM delivers FM-comparable sound quality on frequencies below 30MHz. By using digital audio compression, rather than amplitude modulation techniques, it can fit more signals, with higher quality, into a given amount of spectrum
Asked by Electronics Weekly if this would reduce the big bugbear of digital radio receivers – the power consumption, Rowen replied, "Absolutely. One reason why HiFi has been widely adopted is because it runs at lower clock frequencies than other standards."
Tensilica HiFi 2 Audio DSP Supports HE AAC by Dolby in Digital Radio Mondiale; Now Offers Decoders for All Major International Digital Radio Standards.

SANTA CLARA, Calif. USA – March 30, 2009 – Tensilica, Inc. today announced the immediate availability of the Digital Radio Mondiale (DRM) decoder on its popular HiFi 2 Audio DSP, which can be easily integrated into system-on-chip (SOC) designs. The implementation is based on software developed by Dolby and has passed Dolby’s certification procedure. Now designers of digital radio systems can use one processor core – Tensilica’s HiFi 2 Audio DSP – to run all decoders required throughout the world for digital radio, enabling a universal worldwide digital radio receiver. Tensilica’s HiFi2 Audio DSP already has support for four other terrestrial and satellite standards: DAB, DAB+, HD Radio, and XM Radio.
DRM can deliver FM-comparable sound quality on frequencies below 30 MHz (the bands currently reserved for AM broadcasting) for very long-distance signal propagation. It has the advantage of being able to fit more channels into a given amount of spectrum with higher quality because it employs digital audio compression rather than amplitude modulation techniques. DRM has been approved by the IEC (International Electrotechnical Commission), and the ITU (International Telecommunications Union) has approved its use throughout most of the world. Approval for ITU region 2 (North and South America and the Pacific) is pending. More detail on DRM is available at www.drm.org.
“In today’s economy, manufacturers don’t have the luxury of developing different radios for different geographic markets,” stated Larry Przywara, Tensilica’s director of mobile multimedia. “Now single SOCs, including the HiFi 2 Audio DSP, can be compatible with all global digital radio standards. We chose Dolby’s implementation of DRM because of our previous close collaboration with them on HE AAC and derivative standards including DAB+ and T-DMB (BSAC). Two Tensilica customers have already licensed the HiFi 2 DRM decoder.”
“Both India’s and Russia’s regulators just recently have taken serious steps towards digital radio and mandated DRM due to its advantages of wider geographic coverage in the sub 30 MHz spectrum. With these countries gaining momentum, the arrival of Tensilica’s solution appears to be just in time for the marketplace,” stated Toni Fiedler, senior manager, business development, Dolby Laboratories. “Tensilica’s HiFi 2 Audio DSP will enable development of low cost DRM receivers by leveraging the aggregate investment in all the digital radio standards for highly integrated multi-standard SOCs. HiFi 2 provides a proven, approved, drop-in audio solution.”
Because the HiFi 2 Audio DSP is based on Tensilica’s programmable Xtensa processor, it provides chip designers with one hardware platform that can be used for multiple audio standards. Tensilica, its customers, and its partners have ported over 50 software packages to the HiFi 2 Audio DSP, so designers can pick the software they need for the application. As the market evolves and new standards are defined, they can be easily and quickly ported to the HiFi 2 Audio DSP, thereby “future proofing” the chip design. The HiFi 2 Audio DSP has been designed into chips for portable devices by five of the top 10 semiconductor companies.

Availability
The DRM decoder is available now from Tensilica.