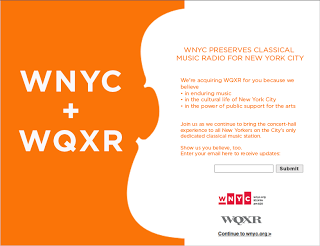 The New York Times Company will sell WQXR-FM to WNYC Radio and Univision, the companies announced on Tuesday, in a complex deal that preserves WQXR as the only station devoted solely to classical music in New York City, but that could alter its character.
WQXR would move to a weaker signal near the high end of the FM band, and would become a listener-supported station, owned by WNYC, the nation’s largest public radio station. The Times Company, which has been trying to shed assets to raise cash and weather a newspaper industry downturn, would get $45 million, but would sever ties with a station it has owned since 1944.
The long-rumored sale of WQXR, at 96.3 on the dial, and the real possibility that such a move would spell the death of a major classical music purveyor on the airwaves, was a depressing thought for fans. Classical music radio stations have been dwindling in recent decades.
Talk of the sale also sent shivers through cultural institutions that rely heavily on WQXR, like the New York Philharmonic, the Metropolitan Opera and the Juilliard School.
The parties involved said the station would keep a classical music format. But new ownership and a transition to public radio raise other concerns for those cultural institutions, creating a competitor for the diminishing pool of charitable dollars for the arts, and potentially changing the cozy relationship they have had with a station that gives them ample exposure and greatly broadens their reach. WQXR is a major outlet for the Met’s venerable Saturday afternoon broadcasts. “There would be a huge void if, in our home city, the international broadcasts were not heard,” said Elena Park, the Met’s assistant manager for editorial and creative content.
Laura Walker, president and chief executive of WNYC, said those institutions had nothing to fear from the transition. “We will not only look to continue those relationships, but to extend and expand and deepen them,” she said, adding that WNYC has long wanted to have an all-music station and to lessen the music content on its existing FM station, at 93.9.
Classical music fans may be relieved by WNYC’s pledge to keep that focus, but fewer will be able to tune in. Under the deal, WQXR would trade places on the dial, and transmitting equipment, with WCAA, at 105.9, a station owned by Univision, a major Spanish-language broadcasting company. Both stations broadcast from atop the Empire State Building, but WQXR would give up its 6,000-watt signal for WCAA’s signal of about 600 watts.
But Steve Shultis, the chief technology officer of WNYC, said the reach and quality of the signal was “not a linear comparison” based on wattage, and there are no plans to make the 105.9 signal stronger, which would require obtaining a different kind of F.C.C. license. He said a clear 105.9 signal reaches about 30 miles from the broadcast antenna, extending into southwestern Connecticut and Central New Jersey — an area that is home to 12.6 million people. The 96.3 signal extends about 12 miles farther, reaching 17.1 million people.
WQXR is broadcast even farther afield on independently owned “repeater” signals in Poughkeepsie and Asbury Park, N.J. It was not clear on Tuesday what would become of those arrangements. Listeners will still be able to go online to hear WQXR, which will retain a Web site of its own.
Janet L. Robinson, chief executive of the Times Company, said that other companies had expressed interest in buying the station. It was not clear if any made actual offers.
WQXR’s 19 full-time and 2 part-time employees who want to stay after the deal closes — expected late this year — will have to apply for their jobs. New York Times reporters and critics regularly appear on WQXR, but that arrangement will not continue, Ms. Robinson said.
The deal gives Univision a stronger signal and a coveted spot near the middle of the FM band for WCAA, reflecting the region’s growing Hispanic population and the increasing prominence of Spanish broadcasting. WCAA’s mix of talk and music includes the morning show of Luis Jimenez, one of the most popular Spanish-language radio hosts.
Univision agreed to pay the Times Company $33.5 million. At the same time, WNYC would buy the 105.9 equipment and license, and the right to the WQXR call letters, from the Times Company for $11.5 million. The transaction requires F.C.C. approval.
Along with the Met’s Saturday performances, WQXR also broadcasts concerts by the New York Philharmonic, Juilliard-connected artists and events from major international festivals.
“WQXR has been in so many ways a symbol of New York’s culture for decades,” said Joseph W. Polisi, Juilliard’s president.
The station was founded in 1936 and calls itself the country’s oldest commercial radio broadcaster of classical music, and is in fact one of the first FM stations anywhere, as well as the oldest in New York. WQXR said it had the most listeners for a commercial classical station, nearly one million a week.
Generations of celebrated musicians in their youth were heard on WQXR’s programs, including the violinist Joshua Bell, the cellist Matt Haimovitz and the pianist Orli Shaham. Prominent maestros of the age, like Leonard Bernstein, passed through its studios.
Faced with losses brought on by a deep advertising slump, the Times Company has been cutting costs across all of its operations, including the flagship Times newspaper. This year it negotiated union concessions on wages and benefits at The Boston Globe, and closed a wholesale newspaper and magazine distribution subsidiary.
The company is also seeking to sell assets, including The Globe; another Massachusetts paper, The Worcester Telegram & Gazette; and the company’s minority stake in the company that owns the Boston Red Sox.
WNYC has started a campaign to raise $15 million to cover the purchase price and some transition and operating costs, and the Jerome L. Greene Foundation has committed $5 million. The pianist Emanuel Ax, a co-chairman of the campaign, called preserving WQXR as a classical station “the sonic equivalent of saving Carnegie Hall from the wrecker’s ball.”